Pierre, when the earthquake happened, where were you? – I was very scared. It lasted 35 seconds, that‘s what everyone said. 35 seconds is a really long time. After the massive 2010 earthquake in Haiti, three friends, Mickenson, Pierre and Vitaleme, leave an overcrowded children‘s home and try to survive on the street. In the ruins of their devastated hometown, Port-au-Prince, they reorganize their daily life. They sleep in abandoned houses, play football with the other boys on the street and with a couple of tricks they even manage to get a warm meal. As long as they stick together, painful memories can‘t bring them down. 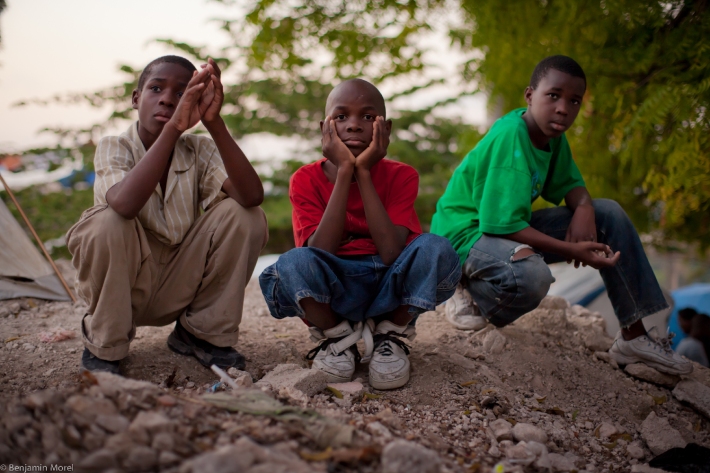 Director Jonas d’Adesky spent six months volunteering in Haiti after the 2010 earthquake then returned to make this narrative about the indomitable children, namely Mickerson, Pierre and Vitaleme. He emphasized, “This was a film about their friendship, not about the earthquake.”  Yes, and he also presented a story about children using their wits in dealing with the harsh hand dealt them still in the delightful, inquisitive, tender ways children do.

d’Adesky and crew worked with children who had indeed come through the earthquake. That alone presented great challenges  requiring a gentle hand and deep understanding for both the children’s courage as well as their delicateness.  The narrative was drawn from their experience at the time of shooting.  D’Adesky didn’t take them back to the catastrophe, but instead authentically revisited it through Vitaleme’s nightmares of the event mixed with the memory of brutality at the hands of an uncle. The vividness of both Vitaleme’s dreams is well known to his friends because the sleep together. They know when the nightmares have come and empathize vocally with him.  We agreed this was a very wise  directorial choice and so did the audience.

Our feedback showed that the  audience were moved by the empathy between the boys on screen. In our “unpacking” of the film in 2 minute timed sessions, several responded first about  the friendship shown in the story. Likewise, when asked what was “not liked” several said that they didn’t like the scene from Vitalmeme’s nightmare recollecting a beating from his uncle. The young audience members reflected their empathy with the three boys in their first thoughts about the film. 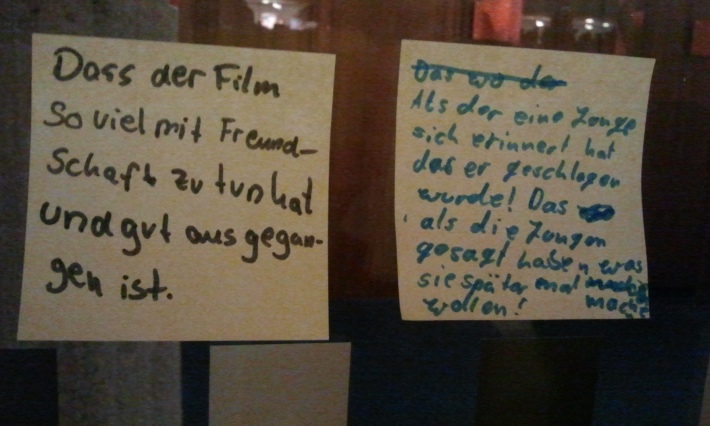 Left. A like: That the film was about a friendship that helped the boys go on.
Right. Dislike: The boy’s memory of being hit. 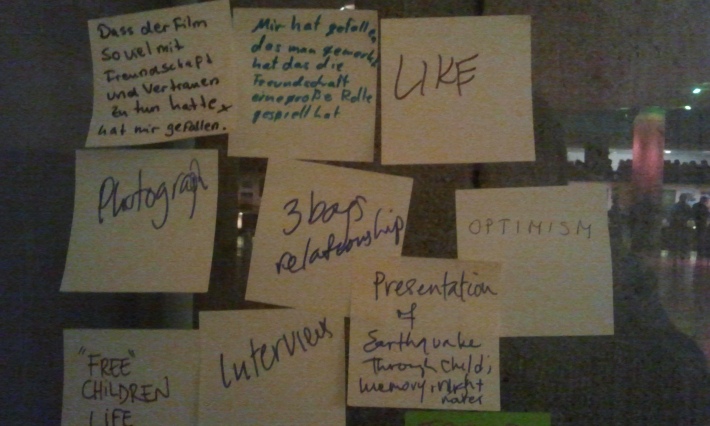 Likes: (Transations to Eng. from left) That friendship played a big role in the film. I liked “That the film had so much to do with friendship and it had a good outcome.”

The narrative was linked through the three boys’ interviews with a woman to whom they referred only as the “rich lady” because they saw her step out of a Mercedes.

The interviews with the woman revealed what had happened to each during the earthquake. She drew out why each boy made the decisions he made, and moreover, highlighted their honesty and concern for one another. Although, the boys left the care of an orphanage for the streets, slept in unlocked cars, the interviews extracted their inherent principled behavior.  The woman’s role wasn’t clear –she could have been with an NGO but d’Adesky chose to leave viewers in the boys’ bewildered yet highly functioning states.  Here, d’Adesky showed another successful choice in preserving the children’s point-of-view. 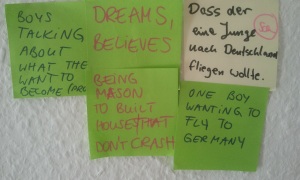 As visibly destroyed as the backdrop of the story is, the film built a place for the  boys’ beliefs, dreams and the hope for their futures.   Mickenson and Pierre decided they wanted to become masons and participate in a masonry training so they could build “houses that don’t crash.”  Vitaleme remains haunted by his memories and considers leaving the country, maybe he’ll “fly to Germany.”

What is clear is that d’Adesky presents the story of these children to capture the empathy of other children in the world.  Our audience participants’ responses confirmed it.  We hope d’Adesky and his team continue to make films revealing how children rely on their instincts and friendship to overcome adversity.